Volcano Boarding in Leon, Nicaragua has to be one of the craziest things I’ve ever done. Ever wondered what it would be like to slide down the side of an active Volcano at up to speeds of 70km?

I did, and let’s just say it’s not for the faint hearted. 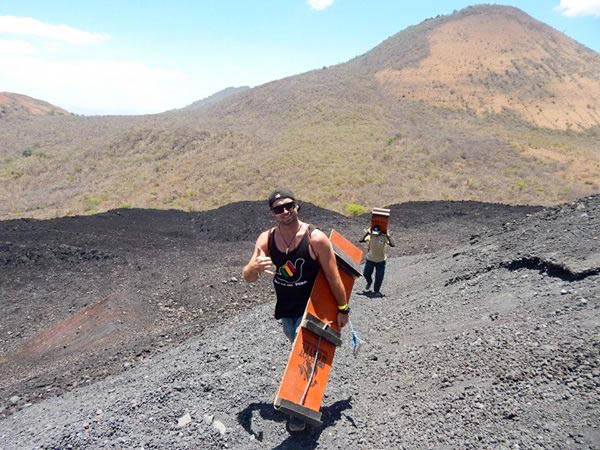 The first time I actually heard of it was when I was in San Juan Del Sur. A few guys were making their way down Central America and had told me about it. At the time though, there was next to nothing on the internet about it, so I decided to check it out for myself. 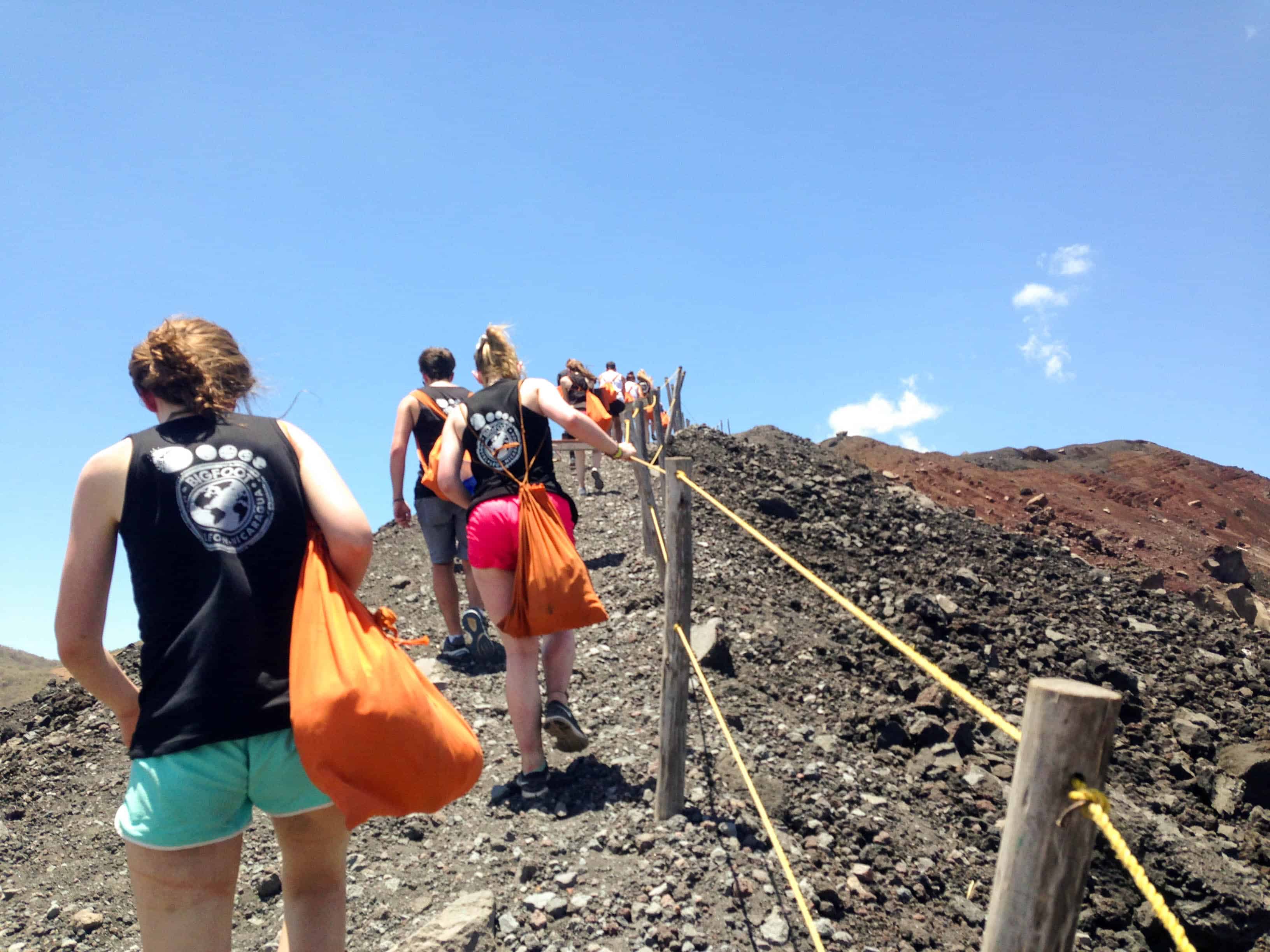 Just inland of the North Western coast of Nicaragua is a place called Leon and that is where you’ll find all your tours to go volcano boarding. When in the city you will notice there is a dozen or so tour companies going volcano boarding but after doing some research I decided to go with Big Foot Hostel’s tour.

Volcano Boarding with Big Foot Hostel costs about $31 USD and includes return transportation (in the back of a truck), safety equipment and volcano board, your speed clocked by radar gun, beer and cookie at the volcano, a mojito when you return to town and also a high quality photo put on their website. Not only that, but Big Foot Hostel is a very popular hostel in Leon so no doubt you will have a great bunch of people who go with you.

The Volcano that you board down is named Carre Negro, which means “Black Hill” which surprisingly enough, looks like a black hill! It is classed as a “highly active” volcano as it was born in 1850 (youngest in Central America) and since had 23 erruptions, latest being August 1999 and is predicted to have another eruption pretty soon according to wiki. So you will definitely feel a bit of heat when climbing the Volcano and also see a bit of steam rising from certain areas. 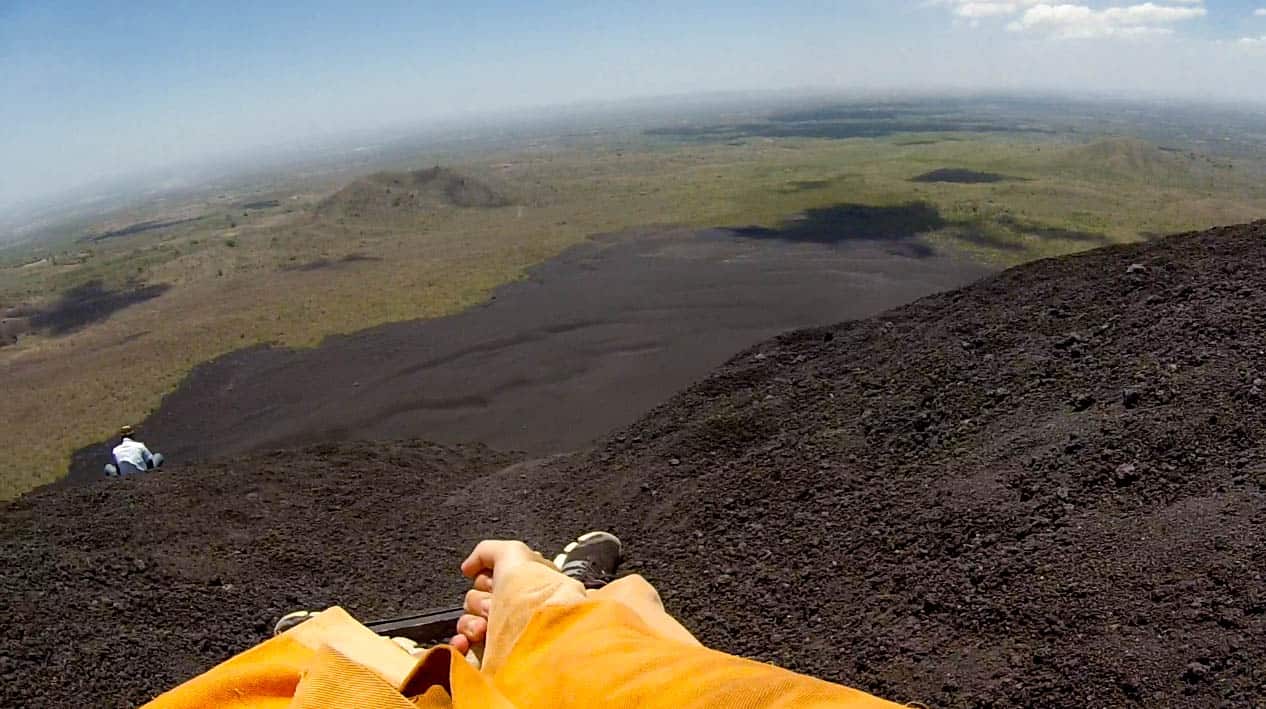 The day started at 8am meeting outside the Bigfoot Hostel. We were all counted for and then we jumped on the back of the truck and head towards Carre Negro. There was about 20 in our group from all over the world and it was a good mix of boys and girls. After about an hour driving through the country we finally came to a building close to the base of the mountain where we had to pay an additional $5 to enter and sign our name in the guest register. If you have a few minutes, go behind that building and check out the Lizard Farm they have going on, there’s some monsters!

After all the entries had been payed, we then jumped back in the truck only for a few mins then we finally arrived at the base of the mountain. Our tour guide Amy gave us a quick safety briefing for our 1 hour hike up the Volcano, then we were off! Surprisingly the hike was really easy and if you’re really lazy, you could even pay some of the locals $5 to carry all your gear up for you.

The views along the hike were incredible, you can see all the sister mountains that surround Carre Negro and apparently if you do an early morning trek up a sister volcano, you can actually see larva glowing although I met some people that had, didn’t see a thing.

The views at the top of the Volcano were amazing, there’s a series of Volcano’s in a line so the scenery is really quite incredible!
Finally it was time to suit up and we were given instructions how to ride the Volcano Board. According to Amy, the fastest speed ever recorded down the volcano was by the guy who invented it, and he got up to something like 120km per hour on a bicycle! That’s just insane. 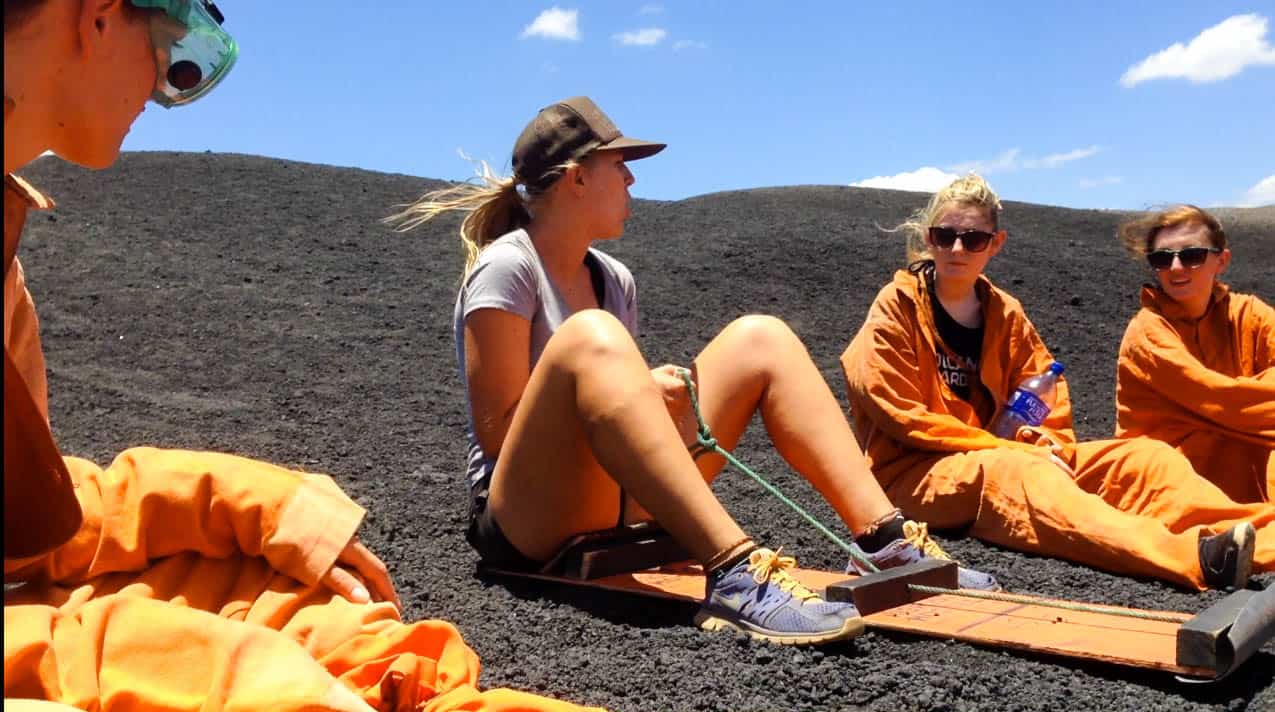 Volcano Boarding sounds simple right? Well there is a challenge to for those with the crazy streak in them. The challenge is who gets the fastest speed for male and female down the volcano, gets a free hat, a free lava shot challenge (3 stupidly spicy shots of rum soaked in ghost chilli’s) and a free singlet if you complete the volcano shot challenge.

Of course I’m up for any challenge so me and a few lads were psyching each other up for it. I announced I’d go last and away they went. Just to give you the feel of the scenario, to start you start sliding very slowly, then all of a sudden theres a steep drop and from the top you can’t see anyone for quite some time until they are half way down. So I’m up there by myself feeling a little nervous but the competitive side of me is saying “go all out no regrets” so off I went.

The one stance advised not to use when going down the hill, is straight legs resting on the front of the board as you have no control and it could end bad. Assuming that was the secret for going fast, I went for it as streamlined as could be and it got real fast, real quick. Half way down the track stood Amy taking a photo as I shot passed her so quickly that I got a little nervous. The finish line was about 200 metres away when the board began hopping, I tried to correct it but it started turning and next thing you know, I was flying in the air. I hit the ground at great force violently summersaulted until I reached the bottom of the volcano. 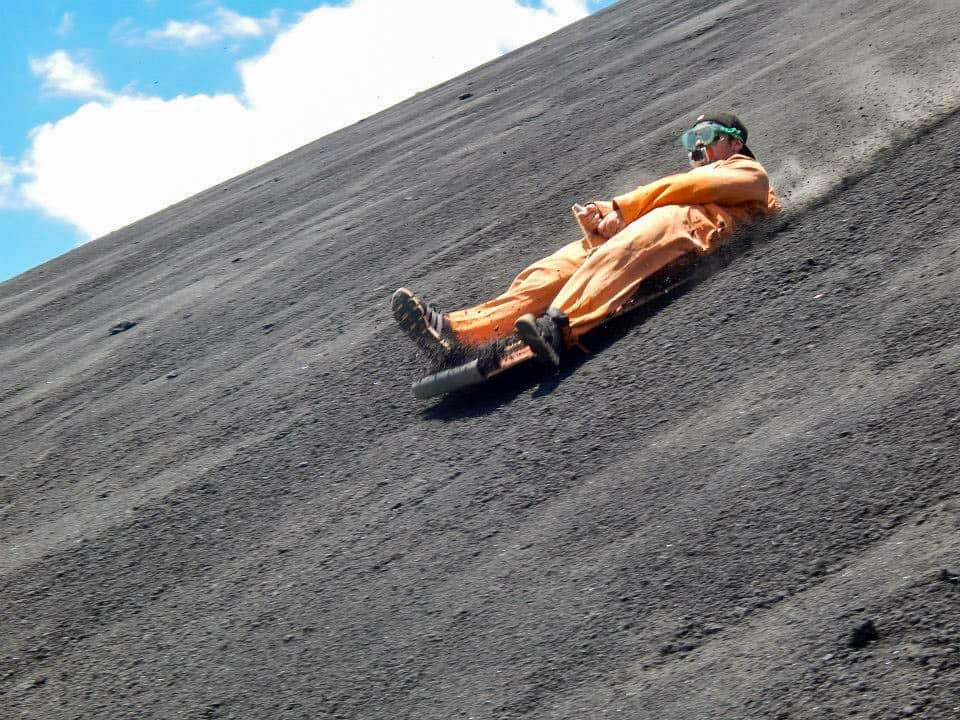 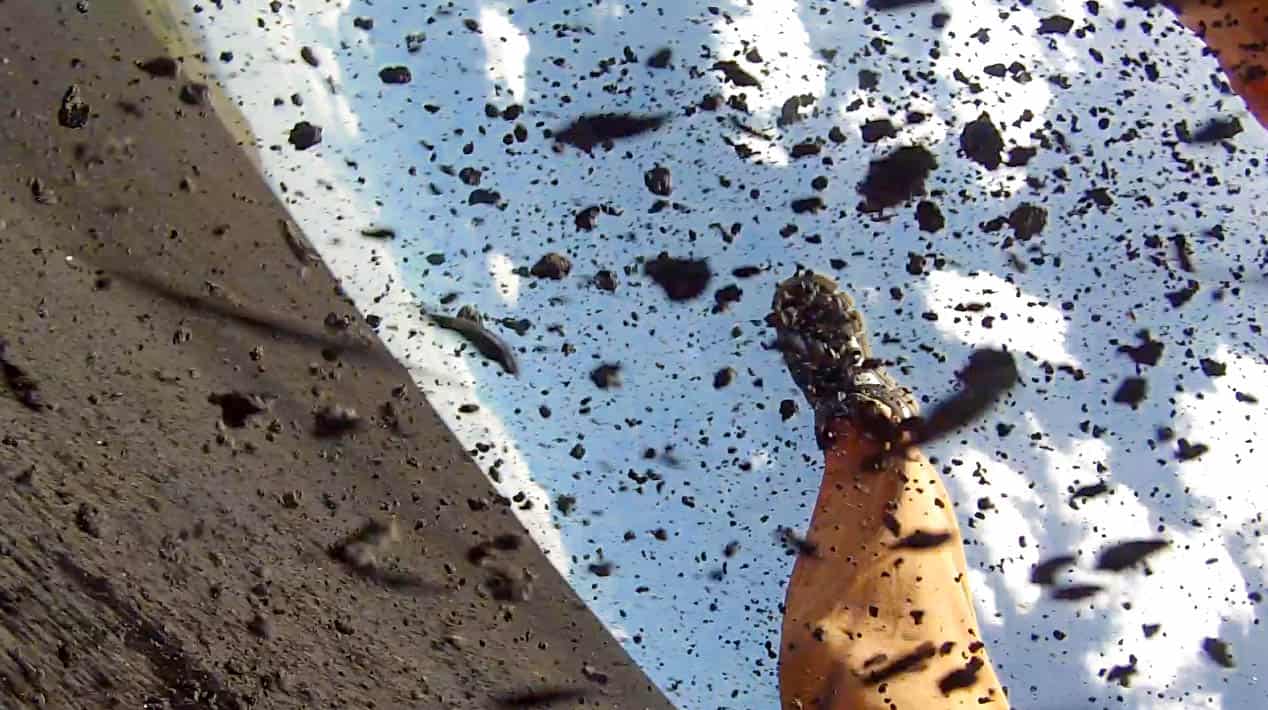 Quite shaken up a little I got up surprisingly not injured, found my GoPro up the hill a little bit and walked towards the speed gun operator. He showed me the gun and I hit 70km which is nuts and returned to the group to find I had the fastest speed of the day! Apparently my wipeout looked so bad from the ground, wish I had someone there to video it.

After a quick beer with everyone at the volcano base, we headed back to Leon for a casual Mojito back at the Big Foot Hostel bar but I also faced my next challenge, the Lava Shot Challenge. 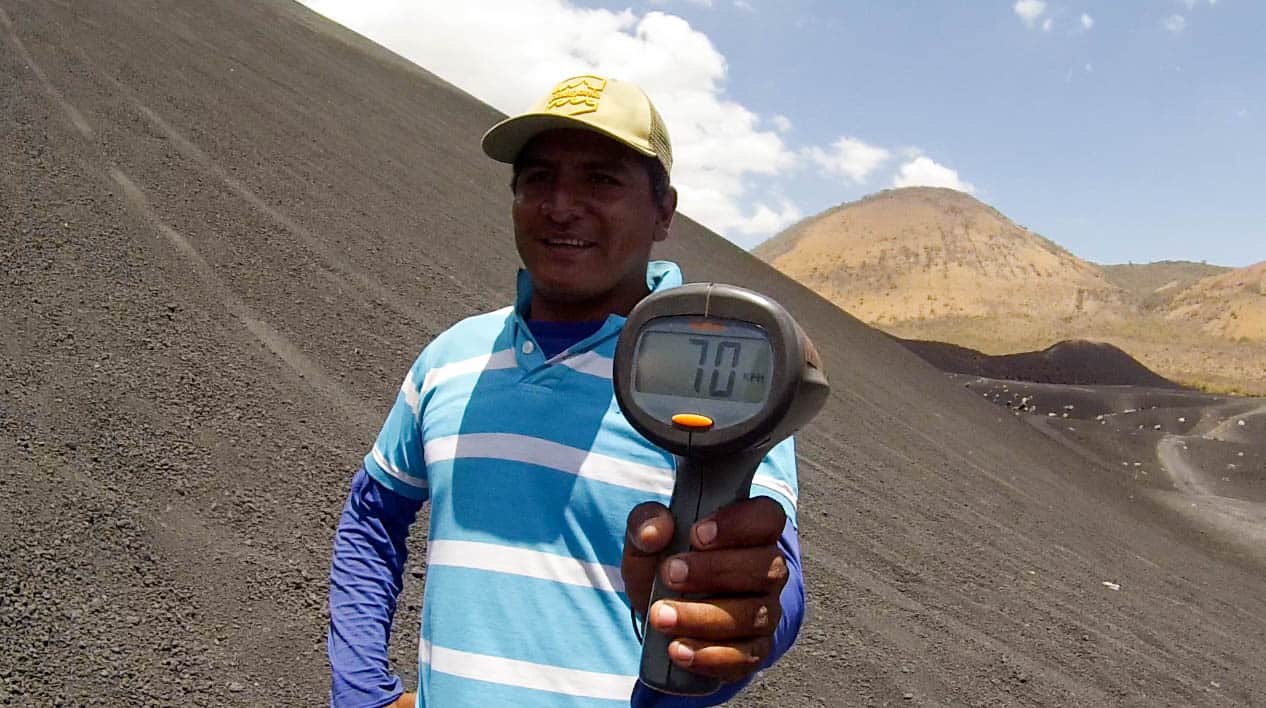 Myself and the winning girl of the day approached the bar and they pulled out a bottle with no label, half filled with different types of chilli’s and topped off with white rum. Next they pulled out 2 standard s

ized shot glasses and one double sized shot glass for each of us and began filling them. The challenge entitled having one shot, waiting 5 seconds then having the second then waiting another 5 until you have the big one. You also have to hold it down for 5 minutes before the challenge is complete. 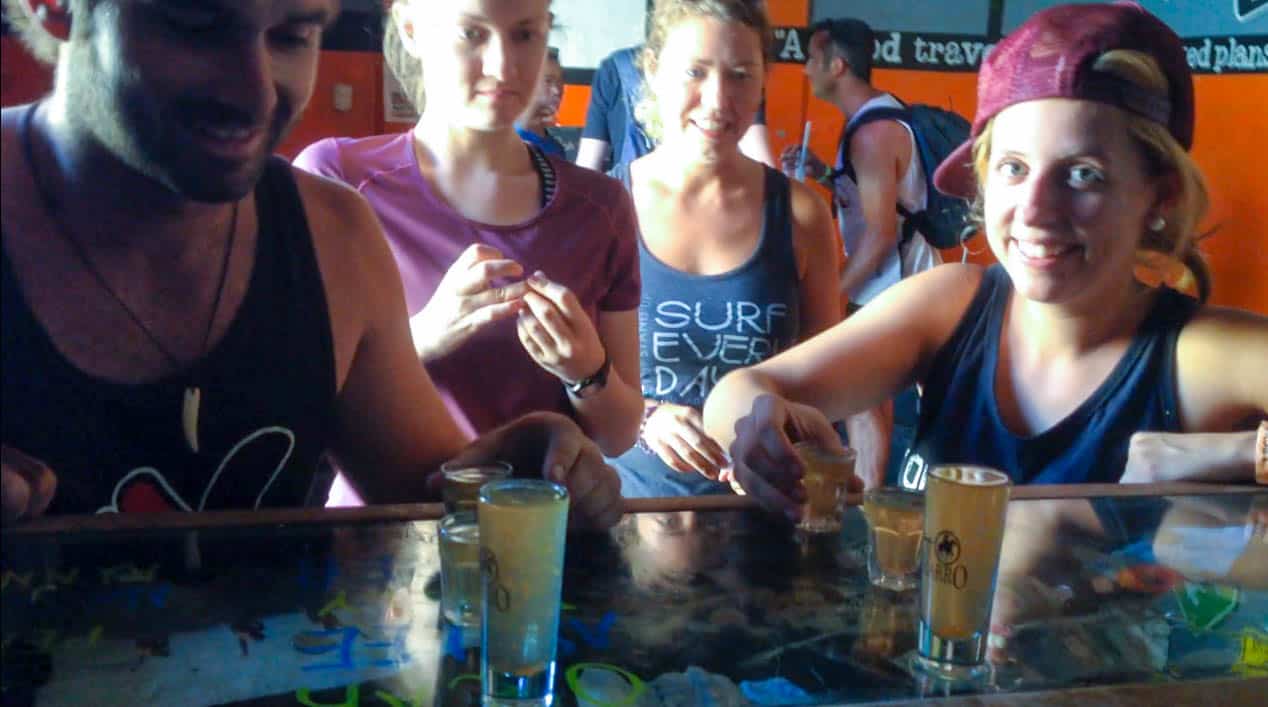 Away we went, the first one instantly burned like a lighter going down my insides. The girl doing the challenge was already dying, she was trying to back out but her friends wouldn’t let her and not too upset by it I took the second. My god, that is when things started getting interesting. My stomach started cramping, I was profusely sweating and my body was screaming WTF are you doing! The girl was almost crying but pulling through surprisingly and ready for the 3rd and final shot. We downed the final shot and began our 5 minutes of hell.

We both sat down on seats as bystanders watched us suffer. It felt like that episode on the Simpsons when Homer eats too much chilli at the chilli festival and starts hallucinating, it was so uncomfortable I was losing my mind. The girl next to me couldn’t speak, she was in her own world of suffering and we just sat there looking like we were infected by a bad flu. The 5 minutes were up but it wasn’t time to celebrate, for about the next 2 hours I was in constant stomach cramps and feeling ill. Finally later on that night after litres of liquid and food I felt good again and reclaimed my singlet and hat for completing the challenge and called it a night.

So that concluded my day of Volcano Boarding! Good memories, good friends and good fun. 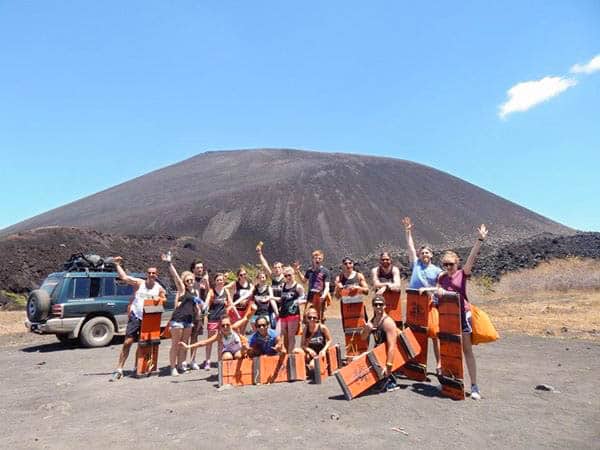 If you haven’t been to Nicaragua before, you’ll enjoy this post I wrote about places to visit in Nicaragua